Bramcote is situated on hills some 5 miles south west of Nottingham on the Derby Road.

The name is thought to be Saxon in origin and to mean “dwelling in the broom”, although Bronze Age remains have been found here in the form of two burial urns discovered in 1978 when building work was being carried out, one of which is pictured below.

Prior to the Norman Conquest the main part of Bramcote was held by Ulchel, Godric, Levric and Alvric, who also had land elsewhere. The Domesday Book of 1086 provides the first mention of a village called Bruncote or Broncote in the Wapentake of Broxtowe. The Wapentake was essentially an administrative district. By the time of the Domesday survey the Norman William Hostiaurus (the usher or porter) had taken over the estates which were very small. There is no church mentioned. It is interesting to note that before 1066 the taxable value of the land was 60 shillings but by 1086 it was just 20 shillings!

During the Middle Ages, parts of the estate were in the hands of the Willoughbys of Wollaton and the convent of Gilbertines at Sempringham in Lincolnshire. After the Dissolution of the Monasteries Queen Elizabeth I granted the Sempringham land to Charles Jackson and William Mason. Their land and those of Lenton Priory were bought by Richard or Thomas Hanley for his son Henry about 1564 and it remained in this family until 1650.

The history of the Hanleys, Sherwins and Longdens can be seen in the houses which they inhabited in Bramcote; namely The Manor House, Bramcote Hills House and The Grange

Bramcote had for centuries been mainly agricultural. The open fields and commons were enclosed in 1771-72 when land was awarded in place of tithes. As a result of the enclosure the layout of the roads, fields and footpaths of the parish were altered. 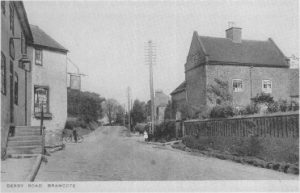 The Derby Road from Nottingham which had been turnpiked in 1759 to Bramcote Odd House, was very useful for travelling in and out of town. In 1784 the road to Smalley Common was also turnpiked with a toll gate at the Odd House. The tolls for both roads were removed in the 1870s. The Odd House, was situated at or very near the Ram Inn. This was the forerunner of the Sherwin Arms public house (seen on the left of the photo) which was rebuilt in 1935.

During the first half of the 19th Century people moved towards framework knitting and coal mining and the population increased from 354 in 1801 to 722 by the 1851 census. In the Victorian period Bramcote became a popular place to live for wealthy business people who enjoyed its rural quiet. White’s Directory of 1864 described it as “one of the most delightful villages in the whole county”. Broomhill Terrace (seen right) on Derby Road, with its top storey full of windows designed to let in plenty of light so that people could work at the frame knitting machines, is a surviving example of a framework knitter’s house.  There were several of these in the village which have now been demolished. Eventually competition from the factories meant that the villagers had to diversify and many went into domestic service or travelled to the large factories in Beeston or Stapleford.

A comparison of the present village with the tithe map of 1846 shows that the basic shape of the village has not greatly altered, although it has obviously expanded. Bramcote Hills, once described as waste land, has become a housing estate , the A52 has been widened and the Stapleford bypass constructed. These roads and Town Street (the road through the village formerly known as Main Road or Village Street) are extremely busy, but fortunately leave the core of the village still very attractive and as in Victorian times people are still drawn to live here. A large part of Bramcote village was made a conservation area in 1970 – the first in the administrative district of Broxtowe!